One of the first three colleges to be established under the excellent Delhi University, Ramjas college doesn’t just pride itself on its brilliant academia and infrastructure, but also its famous alumni. Founded in 1917, Ramjas College stands tall as of the best North Campus educational institutes. Famous for its co-curricular and courses in commerce, arts and science, it certainly becomes a considerable choice for students from across the nation!

And what adds to the charm of this college is its location! 5 minutes auto ride from Kamla Nagar market, Hudson lane, GTB Nagar and Vishwavidyalaya metro station, Ramjas has you covered to help make the most of your bachelor’s life.

Angarag Mahanta, better known as Papon, is a singer and composer. The singer from Assam who is also a lit grad from Ramjas, is the founder and lead singer of the band Papon and the East India Company. He made waves in the Indian film industry delivering hits like Moh Moh ke Dhaage and Jiyein Kyun. A lawyer-turned-politician, Bharti is a member of the Aam Aadmi Party. He has been a vocal activist against the involvement of the HRD in the matters of the university and was part of the campaign against then HRD Minister, Kapil Sibal and his alleged interference in the JEE exams. As a lawyer, this mathematics Ramjas graduate he has practised at both the Supreme Court and the Delhi High Court. Noted actor Manoj Bajpai is a recipient of two National awards and four Filmfare Awards. His roles in films like Satya, Shool, Zubeidaa, Aligarh and Gangs of Wasseypur have cemented his position as a serious actor. He hails from a small town in Bihar and had always dreamed of being an actor since childhood.

With a bachelor’s in history from Ramjas, He applied to the National School of Drama thrice only to be rejected three times. After a stint with Barry John, his fourth attempt proved to be lucky and he was offered a teaching position instead. Gupta wears many hats; the Bcom. graduate from Ramjas is a director, dialogue writer and screenplay writer. He made his debut with the critically acclaimed Aamir in 2008. He followed it up with the real-life story of the murder of Jessica Lal in No One Killed Jessica starring Vidya Balan. An eminent freedom fighter, Prakash was the first Chief Minister of Delhi. He made major contributions during the freedom struggle and was an active participant of the Satyagraha and the Quit India Movement. Producer, screenwriter, director, Bahl has made a distinct name for himself in Indian cinema. With three National Awards to his name, he started his career in 2011 co-directing the popular children’s film, Chillar Party. His real breakthrough came with Queen, which was his first directorial venture. It’s no surprise that he went to Ramjas to give a kickstart to his creative genius! Rana is a successful male model who won the Mr. India contest in 2008. He has appeared on reality shows like Big Boss and Roadies resulting in a huge fan following. After walking the ramp for all the top designers at major fashion weeks, he turned to Bollywood with the film, Saheb, Biwi aur Gangster Returns. Noted film director, producer and screenplay writer, Ramjas’s Jha is known for his socio-political films like Gangaajal, Apaharan, Raajneeti and Aarakhshan. He has also made documentaries on social issues and won a National Award for it. In 1984, he received a National Award for his film on bonded labour in Bihar, Damul. A filmmaker with a social conscience, he also heads Anubhooti, an NGO that works towards welfare and disaster management in Bihar. North Campus is home to many such personalities who have made every DU student proud. If you have just started your DU life or are looking for a place to stay, CoHo.in is at your service. With amenities like a fully functional kitchen, cleaning service and an app to help to manage your stay, CoHo is the perfect place to make your college memories. Just move in with a suitcase, everything else is on us. 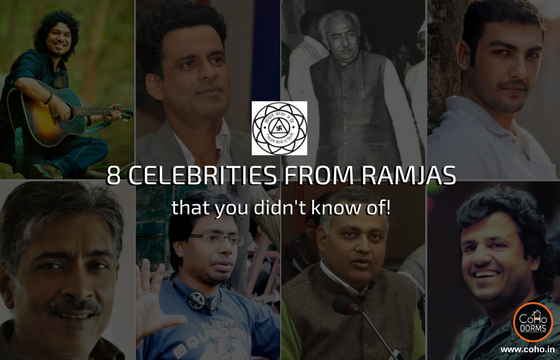 Article Name
Did you know these people went to Ramjas?
Description
One of the first three colleges to be established under the excellent Delhi University, Ramjas college doesn't just pride itself on its brilliant academia and infrastructure, but also its famous alumni.
Author
Shriya Garg
Publisher Name
CoHo
Publisher Logo