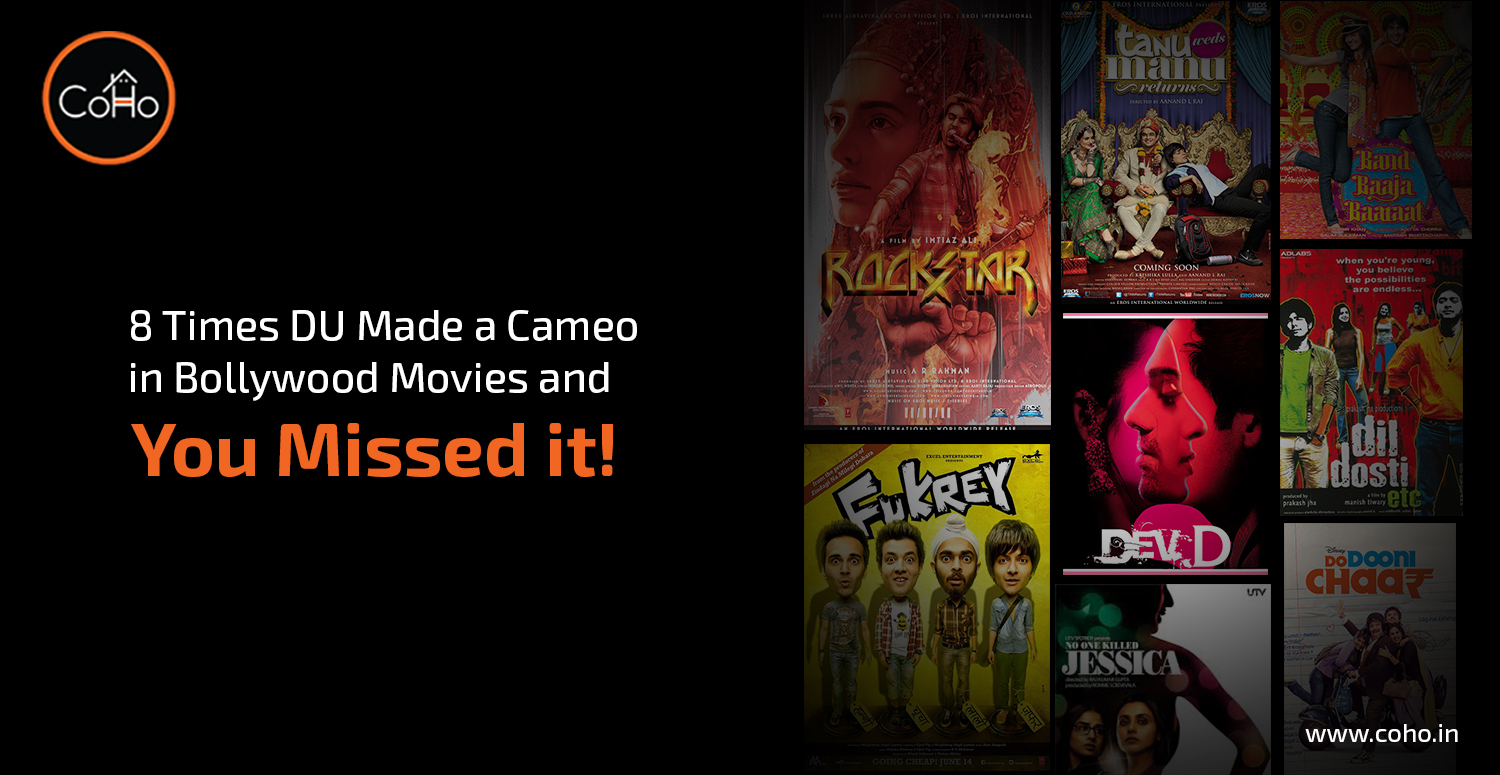 Seeing your own college in a movie can be an overwhelming experience. The strangeness of the familiar being encountered in something that is fundamentally new–it truly is uncanny! And if you are a student of Delhi University, this sort of thing happens quite often! There are several Bollywood movies in which colleges of DU have made an appearance. And why wouldn’t they? So many movies are centred around the lives of college students, and it is no wonder that some of them are studying in DU as well!

The trick here is that the colleges are not often mentioned as such, so you have to know the lay of the land of these campuses to be able to spot them. Here we list out for you 8 movies in which scenes from various movies have been shot in DU colleges. How many of these were you able to spot? Be honest with yourself, as it is highly likely that you didn’t notice most of them!

Featuring a quiet boy playing guitar and a high-strung girl he is trying to woo, the quintessential relationship depicted in this film is also the fantasy of many students! Ranbir plays the role of Jordan, a Hindu student, who is smitten with Heer, a Stephanian, played by Nargis Fakhri. (It is quite common to hear of cross-college romances when it comes to these colleges, which face each other in real life). Parts of the movie were shot in Stephen’s, in Hindu, and in SRCC as well. Lots of ground this movie covered!

Directed by Mrighdeep Singh Lamba, the film Fukrey is about four boys (‘fukreys’, a Punjabi term for extremely lazy people who love avoiding work!) who want to earn a quick buck, portrayed by Pulkit Samrat, Varun Sharma, Ali Fazal, and Manjot Singh. Parts of the film were shot in Miranda House, which becomes the college the fukreys wish to get into. Interestingly, in the film the all-girls college is portrayed to be a co-educational institute, reflecting the fantasy of many a boy studying in DU!

A modern take on Devdas, directed and written by Anurag Kashyap, this is a wonderful depiction of what modern life does to love. Starring Abhay Deol, Mahie Gill, and Kalki Koechlin in lead roles as Dev, Paro, and Chandra, this movie takes us through their journeys, which can often be seen to traverse the campus of Hansraj college, where Kashyap himself went as a student of Zoology Hons. This one was pretty hard to spot to be honest!

Directed by Maneesh Sharma, and starring Anoushka Sharma and Ranveer Singh as the lead characters, this movie made us all go crazy with the craziness of these two! The adventures of Shruti, who wants to become a wedding planner, and Bittoo, who has no plans of returning to his village, takes them to Hansraj college and its world renowned Break Pakodas! In fact, the entire song Takribein is also shot within the campus of that college as well. If you’ve ever been to Hansraj or had friends there, you would’ve spotted this in the blink of an eye!

Based on the terrible real life incident of the murder of Jessica Lal, the movie No One Killed Jessica addressed the controversy surrounding that murder. Directed by Rajkumar Gupta, and starring Vidya Balan as Sabrina Lal and Rani Mukherjee as Meera Gaity, this movie was truly gut-wrenching to watch. Interestingly, all the courtroom scenes in the film were shot inside the Kashmere Gate campus of Indraprastha University, which was dressed up to resemble a court, but was actually just a room inside the campus!

A movie about the uncertainties that youth throws in our face and the paradoxical possibilities it opens up for us at the same time, Dil Dost Etc is a complex tale of yearning to find meaning and the desire to be ambitious – and the tenuous relationship they share when they intersect. And where better to set such a film than a DU College?! Directed by Manish Tiwary and featuring Shreyas Talpade, Nikita Anand, Imaad Shah, and Smriti Mishra as prominent characters, many scenes in the film were shot in Hindu college!

The blockbuster sequel to Tanu Weds Manu, directed by Anand L. Rai and featuring R. Madhavan and Kangana Ranaut as reprising their roles as Tanu and Manu, major portions of this movie were shot in SRCC! It wonderfully captures the spirit of North Campus, covering a wide spectrum of experiences that one can have there, from the rickety e-rickshaws to the always in-demand maggi stalls. To be honest, this one was kind of hard to miss out, since Manu himself goes to DU to give a speech, and there finds Kusum, Tanu’s twin! Also, although Kusum says she’s from Ramjas, the scenes featuring her in college were shot in SRCC! Go figure that one out!

Directed by Habib Faisal and starring Neetu Singh and Rishi Kapoor as the main actors, this is a film about a typical middle class family and how they get by every single day. Following an innocent wedding invitation, things go topsy turvy! And amidst all this madness is Payal, who is taking part in the annual fest of KMC, Renaissance! While this is a heartwarming movie in its own right, something about the inclusion of KMC’s college fest makes it all the more better, doesn’t it?

So that’s all from us about the 8 times DU made a cameo in bollywood movies! Pretty exciting stuff, right, given that it’s not often that you’re watching a movie and all of a sudden there’s your college on the screen! Let us know in the comments which movies we might have missed out on, and tell us if you could spot these as you watched the films. And if you like this article, do leave a like for us, we’ll be grateful! And of course, share with all your friends who’re movie buffs and also study in DU – we bet you have loads of them!

Article Name
8 Times DU Made a Cameo in Bollywood Movies and You Missed it!
Description
Seeing your own college in a movie can be an overwhelming experience. The strangeness of the familiar being encountered in something that is fundamentally new--it truly is uncanny!
Author
Shriya Garg
Publisher Name
CoHo
Publisher Logo